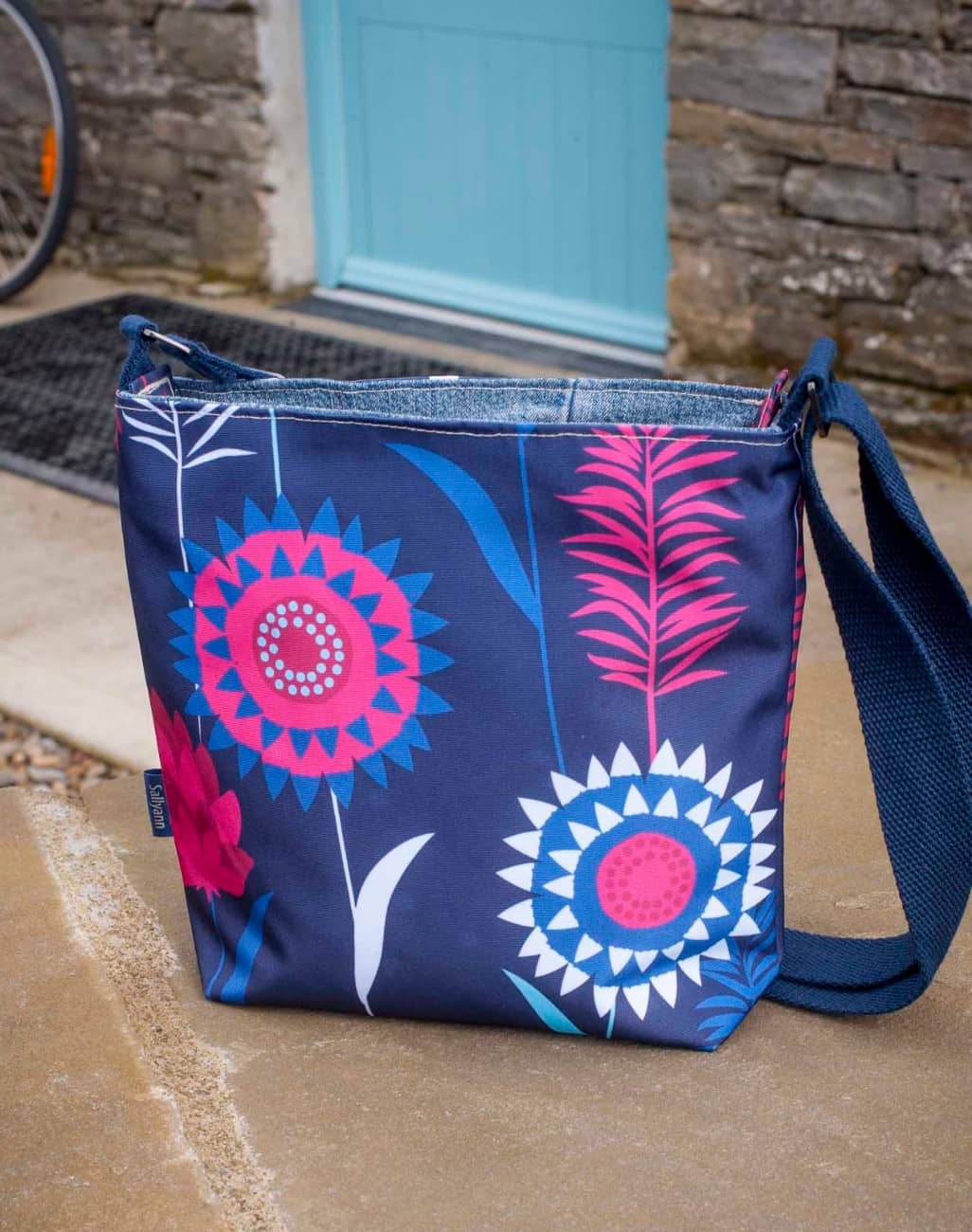 Most of my more recent bags have got names, and a number of people have asked me how they end up with these seemingly random choices: Fiona, Fely, Carolina and now Tara.

Why did the small cross body bag not get a name and is known in my studio as the X Bag? And the Large Messenger Bags are known as Large Messenger Bags, or Lg Mssngr if I’m in a hurry. Not terribly exciting names. But that’s because they were designs I developed myself. I always meant to give the X Bag a better name, but it just became X and the name stuck.

New bag designs tend to come from conversations I have with customers either at my stall or via email. Some ideas are more possible than others. For every “Can you make it a little smaller/larger?” which is often possible, there can be a “Can you make a wheelie bag to fit Ryanair’s bag specification” which is beyond me and my sewing machines!

But every now and then someone suggests an idea for a bag, and the seed of a new design is sown.

Take the X Bag for instance. A relative of mine, the lovely Fely, asked me if I could make a bag a bit wider for her. She wanted room for a book and a bit more “stuff”. And so the Fely Bag was born.

A fellow market stallholder loved the Large Messenger Bag, but wanted a small one, preferably with denim on the outside. What started as  a one off special for Fiona became one of my bestselling designs when I reversed it so the denim was the lining, as normal, and the showerproof fabric was on the outside. The Fiona Bag had arrived.

The Carolina Bag was a supersized X Bag designed initially to provide room in a bag for the medication required by a busy mum for her son who had complex medical needs. With a bit of tweaking it became the largest bag in my range, and a very useful overnight bag or baby bag too!

And now there is the Tara bag. Tara is another fellow stallholder at Chapel Lane Market, and she makes very pretty beaded jewellery (check out Tara’s Trinkets). Tara has been a loyal customer of mine, and she has a few of my bags. She has tried and tested them.

So when she asked me about a bag that was deeper than a Fely, but not as big as a Carolina, I was intrigued. I roughed out a protoype.

I then put it through the rigorous testing I always employ before a bag design is introduced. It has to live with me (a test in itself some might say), get thrown around the floor of the car, take a plane journey, deal with airport security, be loaded up with shopping AND do several markets before it can be considered part of my range.

I showed the prototype to Tara, and it passed her test too. So, as with the other bags, I asked Tara if I could name the bag after her, given that she was the origin of the idea. And that’s how the Tara Bag got its name.

What’s next I hear you ask? In response to many requests, I am working on a backpack design. I have the basic idea clarified in my head now, but I need to source the metal fixings for the design, and these take time to get right. But 2018 will see a backpack design. And its name? That’s a secret, for now.

The Tale of a Cat & Mouse Zip Top Tote

Imbolc is here – and that’s a Good Thing!

This website uses cookies to improve your experience while you navigate through the website. Out of these, the cookies that are categorized as necessary are stored on your browser as they are essential for the working of basic functionalities of the website. We also use third-party cookies that help us analyze and understand how you use this website. These cookies will be stored in your browser only with your consent. You also have the option to opt-out of these cookies. But opting out of some of these cookies may affect your browsing experience.
Necessary Always Enabled
Necessary cookies are absolutely essential for the website to function properly. This category only includes cookies that ensures basic functionalities and security features of the website. These cookies do not store any personal information.
Non-necessary
Any cookies that may not be particularly necessary for the website to function and is used specifically to collect user personal data via analytics, ads, other embedded contents are termed as non-necessary cookies. It is mandatory to procure user consent prior to running these cookies on your website.
SAVE & ACCEPT
×
×
×

Item added to your cart

Continue Shopping Go To The Cart